Making of - Black Beauty Set I

Written by Manuel Faessler
Hi folks,
As I get asked how I make my pics regularly, I want to start a series of making-of blogposts to explain my light-setups, camera-settings and post-processing. This is the first blog dealing with the first set of the “Black Beauty”-Shooting with Moregha.
Concept/Intro
This was actually the second set we have shot that day, but as it is the first from which I’ve posted pics, I’ll deal with that set first. I think this is an important info, as I tend to start shooting days (especially with newcomer-models) with “easy” light setups, so they can get used to it and doesn’t have to worry too much about the light.
I intended to create narrow band of light with this set, to achieve a soft light, but with a very strong light fall-off. This creates a look that shows great plasticity and sort of a 3D-feel to it. Especially when shooting with models who have beautiful and special features, I want to emphasize that. I wanted to get really dark pictures as well to further guide the attention to the parts of the face and body I wanted. 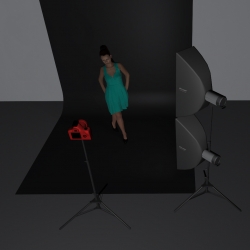 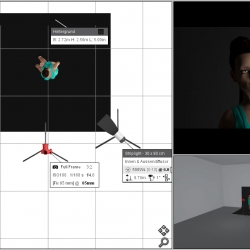 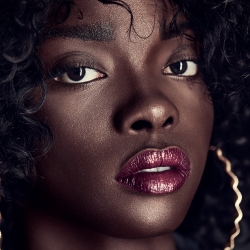 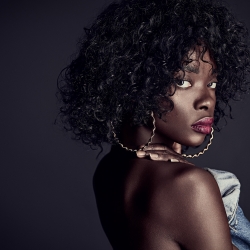 Light-setup
As you can see on the setup-pics (made with set.a.light 3D – www.elixxier.com), I have set up my two profoto B1s (500Ws) with strip-lights (30x90cm) vertically atop each other (without grid), placed about 45° sideways from the camera-axis. The upper striplight was aimed at the chest, the lower one at the upper leg. The flashes were set on low power (I never take notes of the exact settings – as so many factors count into that, it is useless).
I used a black background to get a dark look (as mentioned in the Intro) and to focus the attention only on the lit parts of the pic. I shoot in a relatively big studio which is not that bright. If you use a smaller or very bright studio, you might have to use some black light-shields in order to get rid of all the reflected light, which would destroy that concentrated light-look.
Camera settings
I’ve used my Canon 5D IV for this shot instead of my typical studio-camera (5DsR) because I thought I could use that dynamic-range advantage this time. Those of you who shot with a darker skin model know what I’m talking about ... 😉
For this set I’ve used my Sigma 85mm f1.4 Art lens and for the really close shots my Canon 100mm f2.8 L Macro. The aperture was set to f4 to get a relatively shallow depth of field (but not too shallow). The speed was set to studio-typical 1/160s and ISO100.
I plan to write a little “general” blogpost about how I work in the studio soon, so I don’t want to talk about that now.
Conclusion/ final thoughts
This light-setup is relatively easy, but interesting nonetheless. It is suited for everything, from portraits to full-body shots and can be best compared to a “window-light” (catchlight and light-characteristics). Especially with newcomer-models I choose light-setups which are not too special, so if something isn’t working out the way I’ve planned (posting, expressions, ...) I can use the same setup for other kind of shots and don’t have to switch everything which might stress the model too much.
A real helper with this setup is a little mark for the model on the floor, so she can see where she should stand. As the light-source is relatively narrow and the distance to the light shouldn’t be changed too much, the “freedom to move” is practically non-existent.
That’s it from me ... if you have any questions, please don’t hesitate to aske ... either here as comment, or via e-mail to This email address is being protected from spambots. You need JavaScript enabled to view it.. If you try this setup, I’d really love to see some of your results!!
Cheers,
Manuel